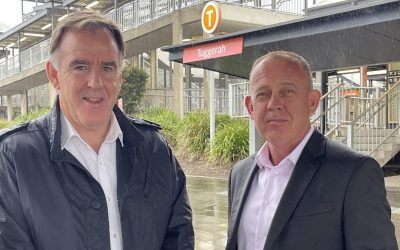 Regional Development Australia Central Coast (RDACC) has applauded the $1B allocation for a dedicated passenger rail line to be built between Sydney and Newcastle in last night’s Federal Budget.

The official budget allocation followed announcements earlier in the week that this catalyst infrastructure project would receive funding, should the Coalition Government be re-elected in May.

RDACC Chair, Lawrie McKinna, says the $1B boost to our regional prosperity has a long history of advocacy from all sides of politics and regional leaders, and offers widespread benefits for the Coast community.

“A more efficient and faster rail network linking the Coast to other regional centres has long been a priority for everyone working for a better future for the Central Coast,” says Mr McKinna.

“The benefits of this project would be far-reaching, including advantages for our local economy through increased visitation and less commuter migration, and could lead to the creation of an additional 3,875 local jobs by 2036.

“Back in 2018, the collaboration between Liberal state and federal government representatives, The Hon. Lucy Wicks, Taylor Martin MLC and Adam Crouch MP, secured funding for the first stage of this crucial project.

“Collective advocacy efforts since this time have attracted bi-partisan support, demonstrated by the recent commitment of Labor leader, Anthony Albanese, with regard to his $500M commitment to commence high-speed rail between Newcastle through the Central Coast to Sydney.

“Whatever side of politics you sit on, everyone agrees this is an essential infrastructure upgrade for the Central Coast, which may now finally become a reality.”

RDACC CEO and Director for Regional Development, John Mouland, says as a large-scale critical infrastructure priority, both RDACC and RDA Hunter have worked together to advocate for High-Speed Rail for our regions since the projects inception in 2018.

“RDACC and RDA Hunter have long been at the forefront of advocacy efforts for a High- Speed Rail Connection to benefit both our regions,” says Mr Mouland.

“And while the proposed project may not be strictly classified as ‘High-Speed Rail’, it does offer a higher-speed rail connection designed to substantially reduce commuter travel times.

“Our role now is to continue working together with the state and federal governments on behalf of Central Coast and Hunter stakeholders to ensure our community gets the high speed rail connection it deserves.”

Mr McKinna further noted that the $1B federal budget allocation will be matched by the state government to provide a $2B commitment; however, further funding will be needed to make this upgrade a reality.

“Obviously we’re extremely pleased with this significant commitment to our regional infrastructure, but these commitments won’t cover the full cost of bringing this project to life,” Mr McKinna added.

“Now it’s important for us to understand how this money will be spent, what are the future stages for this project, and most importantly, what will be the final outcome for all residents of the Central Coast and Hunter regions.”