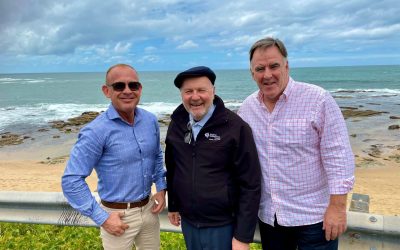 Stepping down from his role as RDACC’s longest serving board member, arts and culture pioneer, Chris King, is recognised for his invaluable contribution to the Central Coast community.

An active member of the RDACC board for close to a decade, Chris is credited with bringing arts and culture ‘into the conversation’ as an economically viable asset for our region.

A former professional actor, opening his own talent school on the Coast in 1988 saw Chris champion the development of many local young stars, with outstanding success.

His understanding of both the entrepreneurial and creative sides of cultural and artistic endeavours also saw him fulfil the role of Manager Arts & Culture for (the former) Gosford City Council.

During his time with RDACC, Chris was instrumental in championing the Central Coast Food Innovation Initiative, by reviewing and deploying best practice international models in the region to position the Central Coast as a world-class centre of excellence for food innovation.

Having served under several Chairs and alongside various board members and CEOs, Chris credits the wealth of collective experience and proactive nature of the RDACC Board for its success as a conduit between all levels of government to achieve incredible results for the Central Coast community.

A committed and curious board member, Chris attributes good governance to strengthening individual understanding through research and discussion, as well as questioning and learning from alternative perspectives.

Chris continues as an active community member, volunteering with the Toukley Neighbourhood Centre, continuing his involvement with local theatre productions, community arts and culture associations, as well as remaining a sitting member on the board of Mingara Recreation Club.

The Board and staff of RDACC would like to take this opportunity to acknowledge Chris King for his diligence, his passion, and his ingenuity in advancing economic and cultural prosperity for the people of Central Coast.