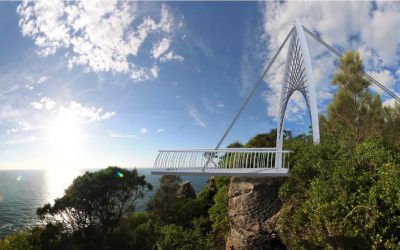 Regional Development Australia Central Coast (RDACC) has celebrated the NSW Government’s announcement of a $4.6 million contribution toward a permanent pathway connecting five of the Central Coast’s most spectacular coastal communities.

Officially announced at the annual 5 Lands Walk event on Saturday 23 June, the funding will support the development of permanent infrastructure designed to boost tourism and showcase some of our region’s most stunning natural assets.

“Construction of a permanent coastal pathway to encourage connectivity along our southern coastline, has been identified on the RDACC’s Infrastructure Priority List, as a key driver for tourism and visitor attraction to our area,” said Mr Walker.

“RDACC is proud to be involved in the preparation of the business case to attract funding for construction of the Winney Bay Cli­fftop Walkway, to grow the physical capacity of our tourism infrastructure and act as a catalyst for the continued development of a walking trail along our spectacular coastal fringe.

“The economic e­ffect of permanent coastal infrastructure on the Central Coast visitor economy is significant, with a conservative estimate of close to 50,000 new visitors, resulting in more than $4.8 million of additional visitor spend per annum, and the creation of 67 additional Full-Time Equivalent (FTE) jobs.”

A whale-themed bridge and lookout will be the jewel in the crown of the coastal pathway, unlocking spectacular views. The Masterplan also incorporates market stall platforms available for public hire for events such as food tastings, destination weddings and festivals.

Following extensive community consultation, the final project plan for the Walkway will incorporate previous community concerns regarding accessibility and the cultural significance of the area.