RDACC urges residents to ‘Have A Say’ on Gosford Waterfront 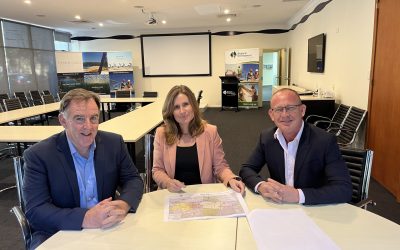 Regional Development Australia Central Coast (RDACC) is lending its support to the Gosford Waterfront revitalisation project and is encouraging all residents to have their say during the official consultation process.

RDACC Chair, Lawrie McKinna, says while rejuvenation of the Gosford Waterfront has long been on the political and economic agenda, several longstanding issues have now been addressed that have previously prohibited this landmark initiative.

“Central Coast Council has developed a concept plan for the Gosford Waterfront development, after working through several longstanding issues with key stakeholders that will finally enable the full potential of the waterfront precinct to be realised,” says Mr McKinna.

“Council is also exploring opportunities to partner with the NSW Government to ensure we will at last see the delivery of a waterfront revitilsation to the quality and standard the Central Coast deserves.”

“Revitalisation of the Gosford Waterfront presents an important opportunity for residents and local stakeholders to help shape one of the most distinctive catalyst projects for our region,” says Ms Cruckshank.

“When contributing to this major development, rather than dwelling on potential obstacles or issues, residents should focus on the opportunities and benefits it can create for future generations.”

RDACC CEO & Director Regional Development, John Mouland, says now is the time for our local leaders to deliver transformational projects that will act as a catalyst for regional economic development.

“The people of the Central Coast are suffering from ‘Gosford Waterfront’ fatigue. We have all experienced decades of plans and inaction, with little to show for it and unsurprisingly, our community has lost faith in the process,” says Mr Mouland.

“Now is the time for strong and united action from our regional leaders to deliver a transformational change to the waterfront precinct that will help define Gosford as one of the truly great cities of Australia and bring about widespread economic benefits for the people of the Central Coast.”