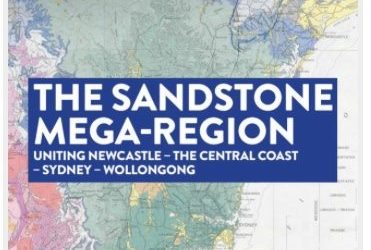 Regional Development Australia Central Coast (RDACC) has welcomed a report from the Committee for Sydney, recommending the development of a 10M person ‘mega region’ stretching from Newcastle to Wollongong through Western Sydney.

The Sandstone Mega Region Report released this week advocates for the Central Coast to become part of an economic powerhouse bringing together Sydney and its surrounding regions through superior transport linkages, with each hub specialising as a major trade point.

RDACC Chief Executive Officer, John Mouland, who was involved with the development of the report, says it makes sense for the Central Coast to play to its strengths to increase its economic viability and employment opportunities.

“The Sandstone Mega Region Report outlines an innovative opportunity for the Central Coast to increase its economic viability and become a major economic and employment destination,” said Mr Mouland.

“Currently, we have several regions competing against one another for funding and resources. Taking a more collaborative approach and focusing on the individual strengths of each region allows us to work together to create economies of scale, which has been proven around the globe to strengthen economic competitiveness and sustainability”.

Mr Mouland says improving transport linkages will also have a major impact on employment opportunities for the Central Coast.

“Improving our transport linkages to Sydney, particularly through enhancements to our rail network, could lead to the creation of an additional 3,875 local jobs in Gosford by 2036,” Mr Mouland added.

“A faster and more efficient rail network will also slash commuting times, reducing the transport time from Gosford to the Sydney CBD from 80 minutes to 40 minutes, making this a much more viable option for many Central Coast residents.

This recommendation also supports recent funding commitments by the Australian and NSW Governments to co-fund a business case to investigate required works between Sydney and Newcastle which include reducing track curvature, deviations and realignments, removal of level crossings, junction rearrangement and better segregation of passenger and freight services.” The business case is expected to be delivered in the next 12 to 18 months and will then proceed to independent assessment by Infrastructure Australia.

The next steps recommended in the Committee for Sydney’s report to further investigate the establishment of a mega region include the commissioning of further research into fast rail between Sydney and Newcastle and the examination of ways to harmonise existing regional plans. Following this, the report calls for the consideration of an inter-city governance arrangement to ensure alignment between each of the six cities’ plans and strategies.

RDACC is encouraging all Central Coast residents to become familiar with the report, its findings and recommendations. A full copy of the report can be found at sydney.org.au