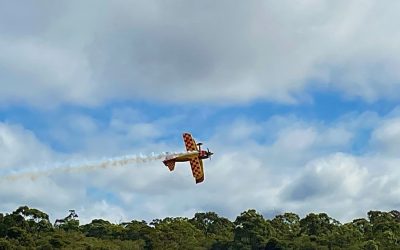 The Central Coast Airshow held this weekend proved the sky’s the limit for premier events such as this to provide a much needed boost to our local visitor economy and help establish the Central Coast as a leading tourism destination.

Officially opened by RDACC Chair, Lawrie McKinna, the Airshow exceeded expectations for ticket sales and visitation, and highlighted the many benefits a light aviation precinct would bring to the Central Coast.

Mr McKinna says this event was was a great source of community pride and demonstrated what a valuable asset the Warnervale Airport is for the entire Central Coast.

“The Central Coast Airshow attracted in excess of 20,000 visitors and provided a significant boost to our local economy,” says Mr McKinna.

“As well as being a great economic boost, seeing the Central Coast host a successful event of this calibre is a great source of pride for our local community.

“It follows in the footsteps of the Avalon Airshow in Victoria — the biggest airshow in the southern hemisphere — and the Pacific Airshow set to come to the Gold Coast in 2023, which attracted more than three million visitors when it was previously held in California.

“These events are injecting much needed funds into the regions in which they are staged, as well as helping to rebuild the spirit and reputations of their local communities in this post-COVID era.”

RDACC CEO and Director of Regional Development, John Mouland, says the re-instatement of the Airshow in 2022 is a positive sign that the establishment of a light aviation precinct is back on the state and federal government agenda.

“As early as 2015, RDACC has officially supported the development of a Masterplan and staged development plan for a Central Coast Regional Airport and light aviation precinct, due to the economic potential this asset would create for the Central Coast, “ says Mr Mouland.

“A precinct of this nature will create around 2,500 local jobs including highly qualified, technically skilled roles to support and administration positions. It will also help to unlock the surrounding endorsed employment lands and the flow-on effects for local suppliers and associated industries would have an exceptionally positive impact on our broader community.

“The re-instatement of the Central Coast Airshow is a positive sign that we are once again working toward making this a priority for our region.

“The Central Coast is in phase of rebuilding following a tough couple of years, and undoubtedly more events of the calibre of the Central Coast Airshow, as well as the development of a light aviation precinct in our region, will be significant contributors to help strengthen our local economy and restore our community spirit.”