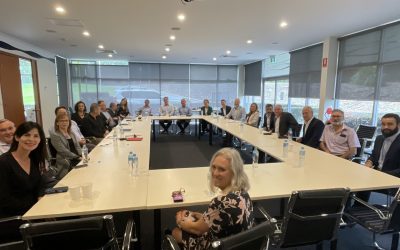 The unprecedented roundtable discussion was the first time in local collective memory that critical stakeholders from all levels of government and both sides of the political landscape have been in a room together to collaborate on a cohesive agenda of priorities for the Central Coast.

RDCC Chair, Lawrie McKinna, says the session forms an integral part of RDACC’s role in providing an important conduit between all levels of government and industry to work together towards enhanced outcomes for the Central Coast.

“Today’s roundtable was a significant achievement in strengthening the understanding that we all have about singing with one voice to deliver shared outcomes for our community,” says Mr McKinna.

“I’m appreciative for everyone involved and pleased to see our four State and two Federal government representatives, from both sides of politics, in the same room to talk about what is best for the Central Coast.”

“Together we need to build a strong regional identity that we can all be proud of. There is a lot of good work being done and the roundtable was an opportunity to align key priorities and work towards a common goal,” says Mr Mouland.

RDACC will provide a central point to coordinate and communicate monthly updates Coast-wide on priorities and actions from the collective stakeholders.

The next roundtable is scheduled for April, with the view to have Central Coast Council representation with the anticipated attendance of new council CEO, David Farmer.