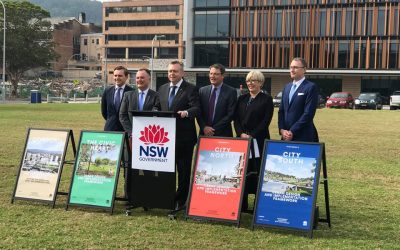 RDACC Chairman, Phil Walker, said he particularly welcomed funding for critical infrastructure upgrades and measures to address some of the current challenges faced in the Gosford CBD.

“We’re particularly pleased with today’s announcement of $42M for water and sewer upgrades across the Gosford City Centre, as RDACC has advocated for these essential works through the Central Coast Infrastructure Priority List to assist in expanding the future capabilities of our regional capital,” said Mr Walker.

“RDACC further welcomes news of the funding for public domain upgrades and a new regional playground in the waterfront parklands, to support the increased activation of the Gosford CBD and waterfront precinct.

“We’re also pleased to hear the state government has been listening to our increasing concerns in relation to the critical carparking shortage in the Gosford CBD and will be exploring possible solutions, due to the impact this has on the city’s ability to attract businesses and consumers.”

RDACC Chief Executive Officer and Director of Regional Development, John Mouland, said news of proposed linkages with the redeveloped hospital echoes the vision of RDACC and supports its work in achieving a City Deal to achieve this aim.

“The Government Architect’s proposal to link the redeveloped hospital to the Gosford city centre to create an ‘innovation district in the heart of the regional capital,’ is directly aligned with RDACC’s vision for connection between the hospital precinct and the CBD and supports our work with Member for Robertson, Lucy Wicks MP, to attract a City Deal to assist in delivering this initiative,” said Mr Mouland.

“City Deals are a new approach in Australia, bringing together all levels of government, the community and private enterprise to create place-based partnerships and foster growth and development, as well as encourage an invested and collaborative approach from all stakeholders.”

It’s this united approach that RDACC says is essential for the continuing success of Central Coast.

“It’s imperative that all levels of government and key regional stakeholders have a shared vision for the Central Coast to attract investment and increase employment opportunity across the region, particularly to achieve the creation of the required 24,000 new jobs by 2036 to maintain our sustainability and viability,” Mr Walker added.

“We look forward to assisting all levels of government, business and the community, to proactively work together to deliver the vibrant and successful future that the Central Coast rightly deserves.”

RDACC is calling on all local residents, businesses and developers to provide feedback on these documents, as well as the Government Architect Reports, during the public exhibition period prior to 18 June 2018.